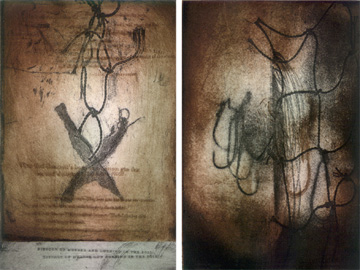 Commemorative project for Emmett Till

Regarding the etching, Iverson states: "My prints investigate how landscape absorbs or retains the history of what has occurred there; in this particular piece I settled on the imagery of fishing nets and hooks for their varied resonances - biblical, subsistence farming - and the echoes they held for me from the civil rights era Emmett Till story (hence the title, "Till")."

Text in the print:

2.) From the Emmett Till trial:
He didn't leave fast enough. They beat him but he was unrepentant. They took him to the river and made him strip down naked. "You still better than me?" Milam asked Emmett. "Yeah," the boy said.
Milam shot him in the head.
They tied Emmett's body to a cotton gin fan and dumped it into the river.

3.) From Carrie Iverson's poem "Reconstruction":
History of murder and burning in the soil

Emmett Till (July 25, 1941 - August 28, 1955) was an African-American teenager from Chicago, Illinois who was murdered in Money, Mississippi. He was shot and beaten for whistling at a white girl; his body was then thrown in the Tallahatchie River with a seventy-five pound cotton gin fan tied to his neck. He remained in the river for three days until he was discovered and retrieved by two fishermen. His murder is often seen as the start of the American Civil Rights Movement, as his mother chose to have an open casket funeral to let everyone see how her son had been killed. Attended by thousands, the funeral photographs of his body shocked the world.