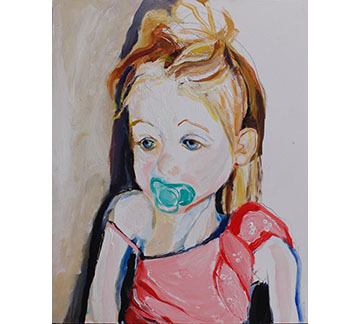 The figurative oil and acrylic paintings of Sylvie Buchler are committed to a passion in depicting the body in a manner that blends realism with abstraction. Buchler’s subjects are known to her; she captures an intense emotion with a quickened resolve and expressionist spirit. Best known for her portraits, her process of wandering through each person’s existence evokes a transparent sincerity.

Sylvie Buchler was born in Tunisia, and she was raised and lived in Paris until 2003. She received a BFA degree from Bezalel Academy of Art, Jerusalem, Israel. Her work has been exhibited in numerous NYC galleries including: Moe’s Meat Market, a gallery, presents a permanent Site-Specific Figurative Mural at Ermine, NYC, June 2016 opening; From Me to You, Recent Paintings by Sylvie Buchler presented by Phyllis Stigliano Art Projects at Moe’s Meat Market, a gallery, June 2015; Criteria, Gallery 128, February 2008; and a Weekend in Chelsea, Chelsea, August, 2007.

Buchler was a recipient of a Fellowship in Painting from NYFA – New York Foundation for the Arts, May 2008. She currently resides and works in New York City.