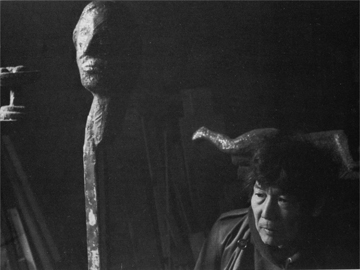 Robert Kobayashi in his studio

Robert (Kobi) Kobayashi (b. 1925 Honolulu, Territory of HI; d. 2015 Honolulu, HI) began his career as an abstract expressionist painter during the late 1940's-early 1960's, then he became known for paintings and three-dimensional work using exquisitely sheared and nailed/tattooed pieces of tin. His metal paintings and sculpture, empowered by bold colors, depict intriguing still-lifes and figures that reveal a sophisticated vision and an innovative spirit.

Encouraged by his sister Fumi to pursue art, after serving in WWII, under the GI Bill he studied at Honolulu Academy of Arts with Wilson Stamper 1946-1948; Paris 1950; and Brooklyn Museum Art School, NY, with John Ferren 1949-1951. He was hired by The Museum of Modern Art to care for Japanese House that was re-installed in the museum's garden for an architectural exhibition 1954-1955; with brief intervals, he continued to work at MoMA until 1978. He received a fellowship from the John Hay Whitney Foundation, NY; and he was a founding member of Brata Gallery 1957 - one of the Tenth Street Galleries, NYC. In 1991, he wrote and illustrated a children's book, Maria Mazaretti Loves Spaghetti, for the publisher Alfred A. Knopf, NY.