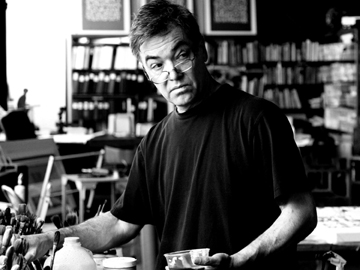 John Himmelfarb in his Chicago studio

John Himmelfarb was born in Chicago, IL.
An established artist, his lush, calligraphic drawings and paintings have always been driven by an unceasing devotion to line. Consistently blurring the boundaries between drawing and painting, Himmelfarb revels in line’s evocative potential to create a synthesis of graphic sign, text and elusive image that challenges one’s ability to interpret visual language.

His work has appeared in numerous galleries nationally and internationally, including the Galerie d'Art Contemporain in Paris, the Metropolitan Museum of Seoul, Korea and the Brooklyn Museum; he is also included in over forty national and international museum collections. Public art projects include paintings for Boston's Logan Airport, and ceramic tile murals for the Chicago Transit Authority, the University of Nebraska, and Omaha Public Schools.

John Himmelfarb received his B.A. from Harvard University, and has since worked from his own Chicago studio. He has taught or lectured extensively as a visiting artist around the country. He has received grants from The Pollack-Krasner Foundation, The National Endowment for the Arts, and The Illinois Arts Council.